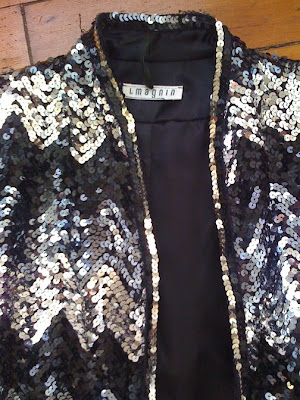 or The Maker got Scooped
There has been a lot going on lately with the first of the trifecta holidays passing; with all the speculation on whether black Friday or today's online black Monday were going to prove prescient for the rest of shopping season and the economy as a whole; with Obama picking his cabinet and the blahdiblah like. But me, I've been reading the news and finding out a few things pertaining to the Vivier blog: 1. I'm a Maker. According to the LA Times coverage on the craft fairs which have been gaining momentum lately - people who make things are no longer called "crafters" which I guess was too closely linked to making dream catchers and scrapbooks, even "DIYers" has been retired. Nowadays, people who make things themselves to sell are called Makers. I make things, bags and bracelets and collages and coming soon jeweled neckpieces (to be an entry very soon) and I kind of like the ridiculous way it sounds - you know they thought of Creators, but thought better of it and settled on Makers. But anyway, that leads me to what else I've been reading about in the press which was going to be this very entry, but I got sidetracked by life and holidays and this entry didn't happen when I thought it would, (which makes me think of another article I read recently and is another thing I can call myself: I'm also a "slow-blogger") and that is number 2: the SPARKLE JACKET. I think I've now seen pieces on it in Garance Dore's blog, Refinery 29 and also the NY Times Style section. Those 3 right there should mean that I ought to scrap my idea to blog about my finds from my fav thrift store Luxe de Ville, but they're just so good, I've decided to write about them anyway. Recently I found this vintage I. Magnin number: 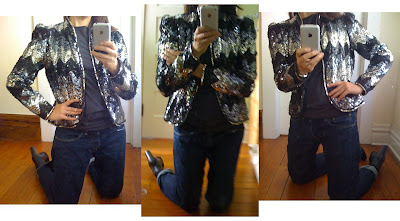 I've worn it one time so far, out to a comedy show and you really really have to dress it down and even still you you get a LOT of attention. People find it hard to pass without a word about how "shiny" you are or that it's like a discoball...But my advice for wearing something like this, besides being sure to dress down whatever else you're wearing with it, is to ASSUME the sparkle. You really have to be prepared for the looks and say to yourself as people watch you go by "Yeah, I sparkle, damn it and it looks cute."

And there's this vintage Norma Kamali paillette, cashmere-lined number which I got last year and really is still an all-star winner: 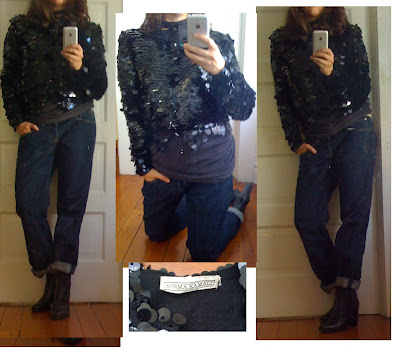 I mean, come on, that is sooo cute. It is like wearing my own little Margiela store on my back. And, look at Miu Miu's version for sale right now at net-a-porter: 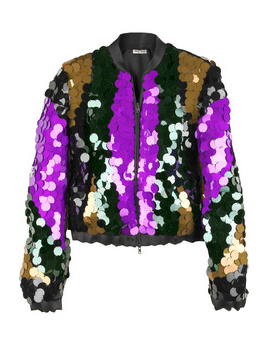 I'd rather have mine, no?
Back to Clare V.