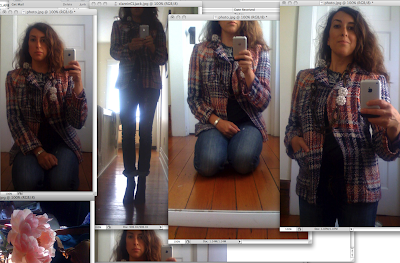 Much to le mari's chagrin, I'm a die-hard thrifter. I've found most of my most precious couture and no-name gorgeous vintage items at thrift stores. I secretly think I have a special ablity to scan the rack for interesting or amazing quality fabrics which I know will be something great before I even have to move the hangars apart. The other day this happened while walking in seedy Hollywood. On Cahuenga, literally on the dirty sidewalk in an abandoned storefront was a scrunched up bouclé jacket I thought 'wouldn't it be funny if it were a Chanel jacket?' I kicked it over to see if it had the double C buttons. It didn't. But something made me kick it again to see who it was made by. And there it was CHRISTIAN LACROIX. Size 38. Made in France. Bingo. I picked it up with two fingers like I was gonna catch the plague and dropped it in the trunk of my car. First stop: Ritz Cleaners. $18 and a few days later, I have my very first LACROIX item. My Hommage, I'm now calling it as I found it literally a day before the genius declared bankruptcy. I got it, CL, I'll take it from here. It was a sign. ;)
The necklace is Malene Birger - the Danish designer. 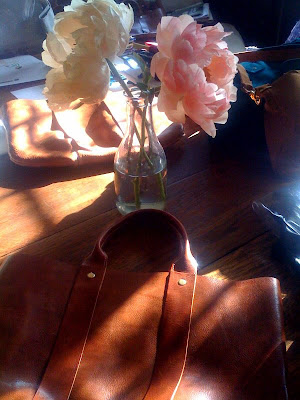 And just for good measure, there's La Trop with some killer peonies in the evening light...
Back to Clare V.