From Bag Maker to Bag Lady: Best of LA! 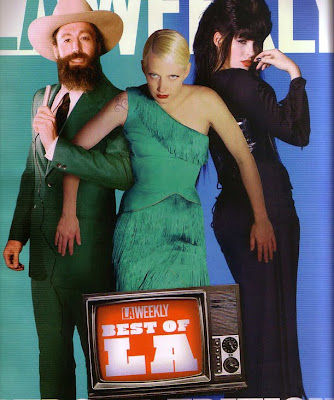 When I got married years ago, I remember being at city hall in Beverly Hills (because we thought it'd be nicer than LA, but it really wasn't) filling out the paperwork for the marriage license. They ask for your occupation. Le mari wrote journalist and, while I had been working as a journalist up until that point, I didn't want that to define me on an official document. I wrote Bag Maker. It wasn't my occupation yet, but I knew that's what I wanted to be. I didn't write designer that as that was a little exaggerated, but maker, well, I did make bags...Very funny to write it - a little bit like writing candle stick maker, and I almost put Bag Lady instead, but thought I had to be serious. When the marriage license arrived, there it was in official print on fancy rainbow hued, impossible to counterfeit paper, in the Bride Personal Data section: Clare Guerrero - Bag Maker. I thought, now I really have to do it or it'd just really be weird to have this certificate reminding me of the dream unfulfilled. 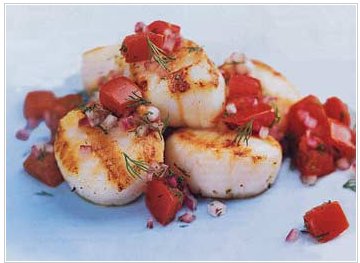 Last night my friend Snow had a very satisfying dinner party (where she made this delish scallop dish, pictured above from epicurious.com.) Amid lively conversations about the sex scandals du jour Polanski & Letterman, and the great Los Angeles rat population, I learned of some of the dinner guests' exciting new projects like Jenny Meier's new meal go-to blog The Modern Busy Girls' Cookbook, and writer Sarah Bynum's book, Ms. Hempel Chronicles - which I loved, just out in paperback.

At the end of the night while helping Snow clean up the kitchen, I was informed very nonchalantly from my friend David that he'd seen me in the LA Weekly. I thought he'd misspoken and I said, "say what?" He said "you were 'Best Bag Lady' in the LAWeekly's "best of" issue, don't pretend like you didn't know that." I really didn't.

So excited that on the way home, I literally parked in 5 illegal spaces to run into businesses where I thought there'd be a Weekly - to no avail. Finally, parking in red in front of Casbah Cafe, was the spot. They had it. I didn't get a ticket.

That's it then, according the one source at least, I'm officially a Bag Lady. 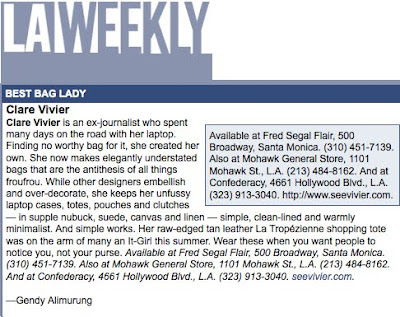 And what a nice little write up, as well! Thanks LA Weekly.
Back to Clare V.